On July 3rd, we disassembled the Printemps CUBEcois banner installation that was exhibited within the Hemispheric Institute‘s Encuentro 2014, MANIFEST! : Choreographing Social Movements in the Americas, hosted by Concordia University. With the help of friends (THANKS! You know who you are), it took only three hours to remove the hundreds of staples, to clip the dozens of sewing points from the forty protest banners that formed the skin of the cube, and unscrew the hundreds of screws holding the wooden structure that measured 13ft high x 17ft wide on all sides. It was a monumental sight within the university’s downtown library atrium. The installation was conceived and built specifically for Encuentro 2014.

The Printemps CUBEcois explores the practice of activating an archive. It attempts to define a purpose for the Artefacts d’un Printemps québécois Archive and its potential motivational role on future social movement choreographies in Québec (and elsewhere). The cube itself is comprised of two components: 1) forty banners used in protest cover seven of eight wall surfaces and the ceiling that make up the cube’s inner and outer skin, and 2) one mural-sized canvas banner print « NE RIEN LÂCHER » that covers an entire inner wall (re)mediates a scene of protest performance as a collage using imagery pilfered from the Artéfacts Archive: its posters, banners, protest signs, actions, stencils, videos. Fifty protest signs and twenty-five protest banners are projected into the protest scene alongside thirty-five minutes of video bring the canvas print to life. The scene is my own retelling — as a striking student at the time — of the 2012 student-led oppositional movement that captured the imagination (and filled the headlines) of the province. It is a non-nostalgic activation of an archive that seeks to nurture the oppositional consciousness raised at the time, in preparation for future struggles. Self-representation is key to building a movement’s own oppositional cultural heritage.

Victor Turner (1986) describes three consecutive phases of ritualistic performance in The Anthropology of Performance that give meaning to the Artéfacts Archive and purpose to the Printemps CUBEcois installation. The initial “separation” phase serves as a rehearsal, a preparatory period when the artefacts are created, when political ideas are shared, when dissent is planned. It is followed by the “liminal” ritualistic performance phase when opposition is manifested, when the artefacts are used during demonstrations, building blockadess or occupations. After oppositional performance comes a debriefing period, a time to “reaggregate” together for collective self-reflection, to strengthen solidarity and build confidence. It may happen at a gathering outside of a police station once released from custody after a mass arrest, or during a film screening that reacquaints activists with past protest performance or while visiting the Printemps CUBEcois installation. Oppositional consciousness during the debriefing period can be better nourished when oppositional cultural artefacts are present. The artefacts, I argue, encourage activists to review past actions, to discuss evolving issues, to advance oppositional arguments, to share strategies, and ultimately to consider future performance. Ideally, the oppositional cultural heritage activated via the Printemps CUBEcois will help close the loop by linking the debriefing phase with a subsequent phase of separation to create a perpetual loop of ritualistic oppositional performance that is able to confront the abuses of neoliberal capitalism and resist its systematic oppression.

The inside of the Printemps CUBEcois became a gathering point that one visitor described as “a safe space that invited me to linger and look more closely at the [composite] banner, with the slide show and videos. I was drawn into the heart of the cube to view the banner scene by the audio that seeped through the forty protest banners that offered their own slogans and indignation. The « NE RIEN LÂCHER » composite collage banner is the “piece de résistance” within the larger Printemps CUBEcois installation that was mounted in the Concordia University Library Atrium during the Hemispheric Institute’s Encuentro 2014 MANIFEST!: Choreographing Social Movements in the Americas.

The Printemps CUBEcois has inspired the Interactive Protest Archive at the U.S. Department of Arts and Culture. 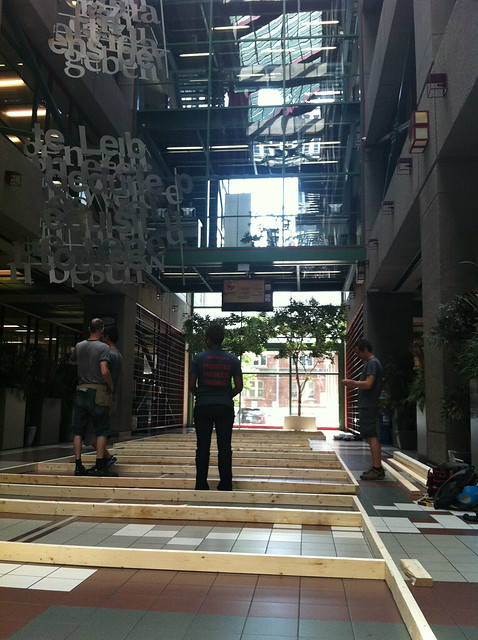 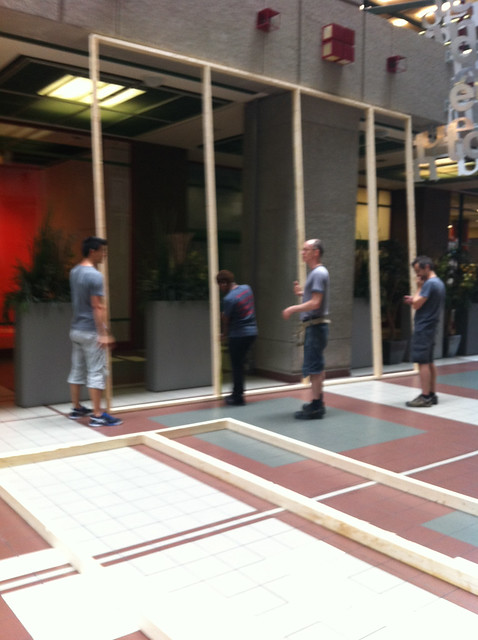 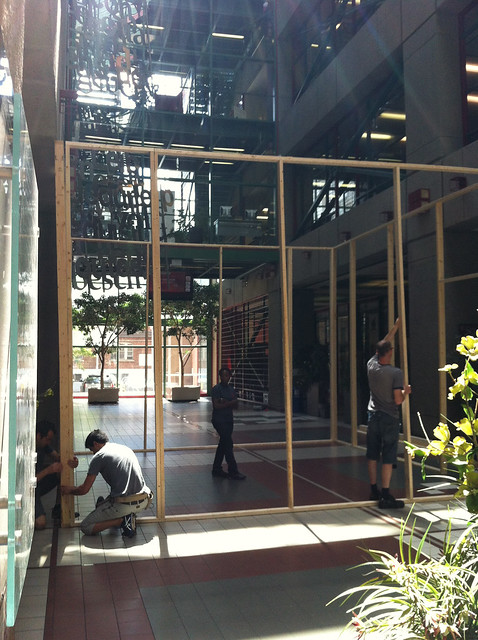 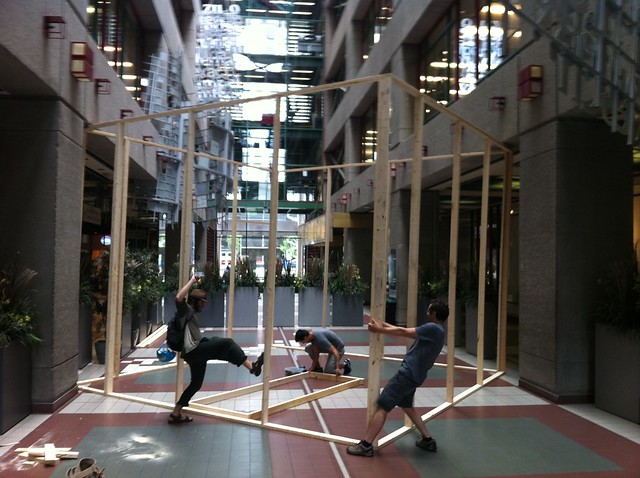 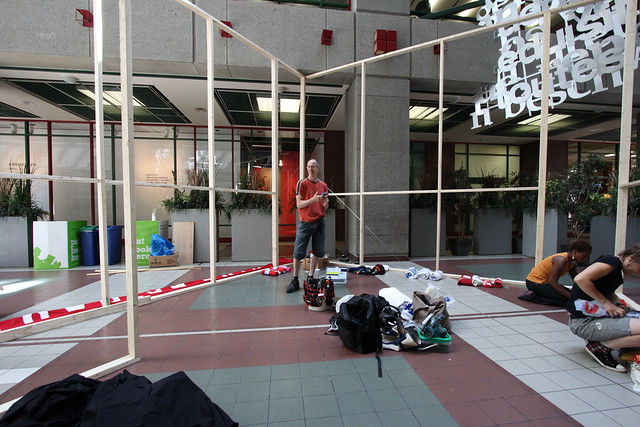 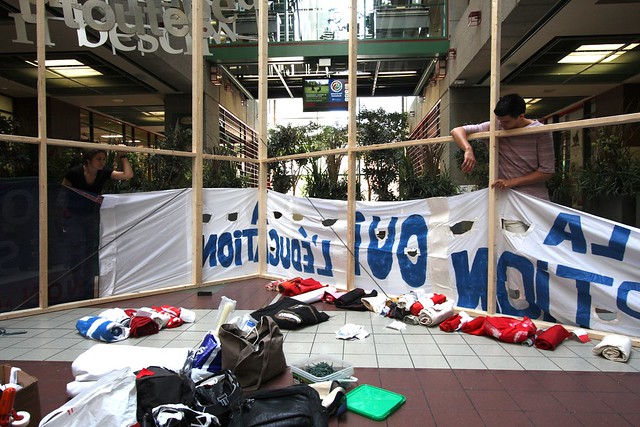 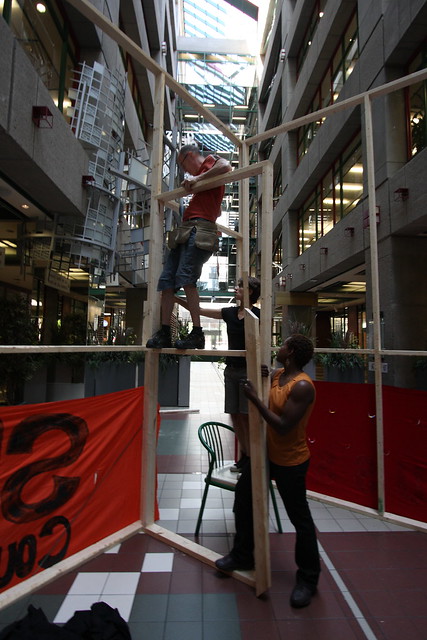 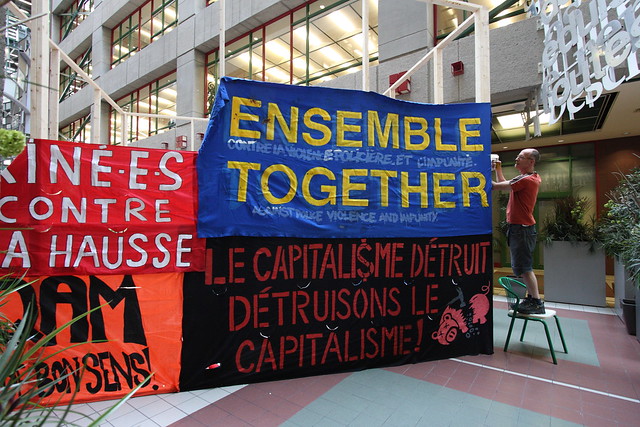 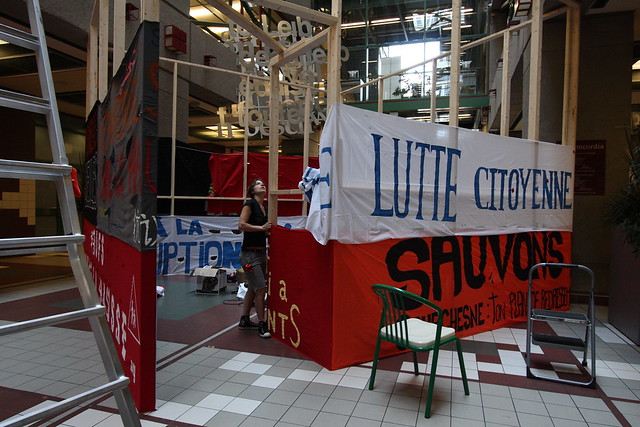 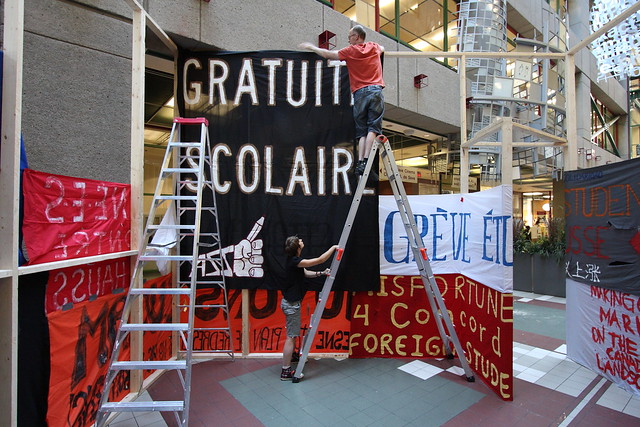 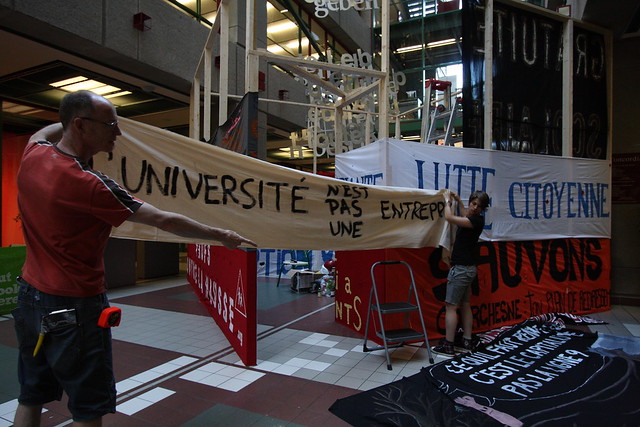 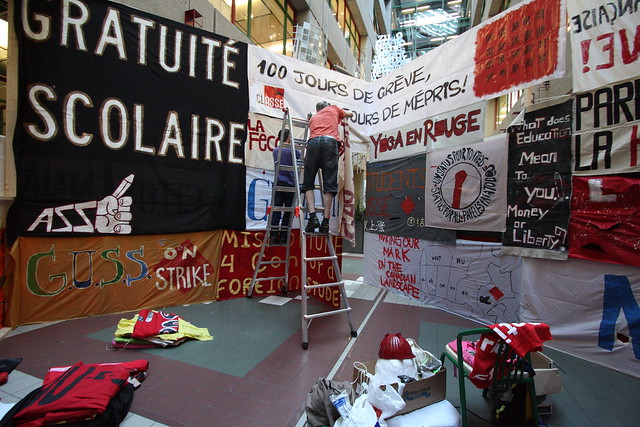 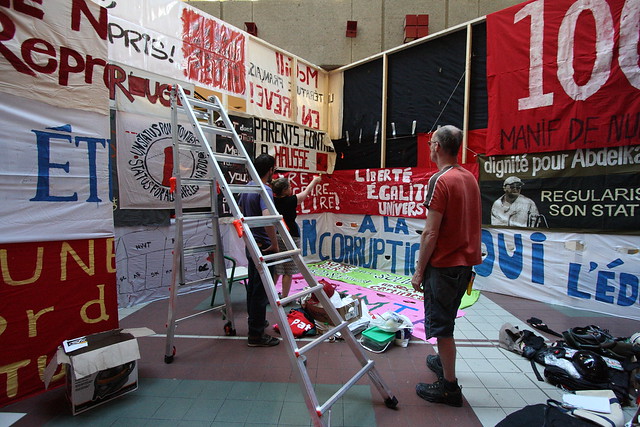 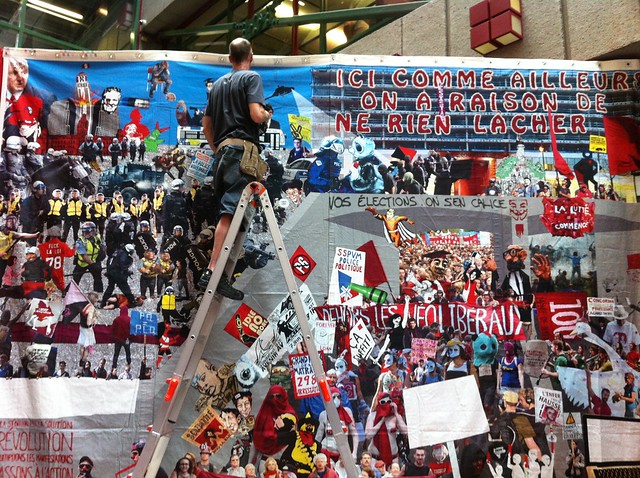 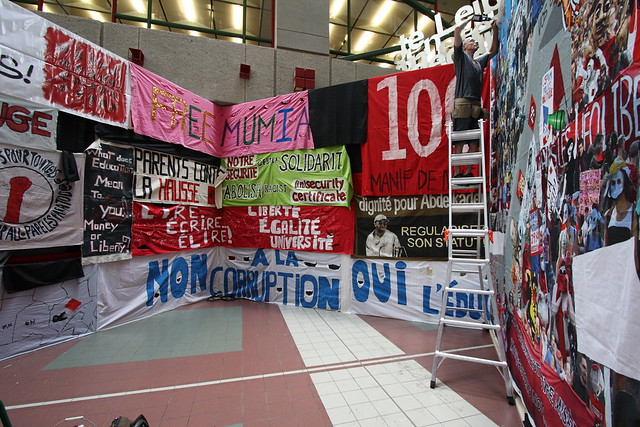 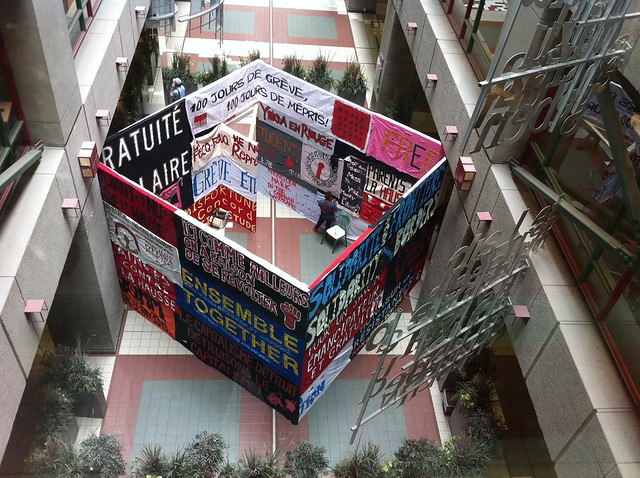 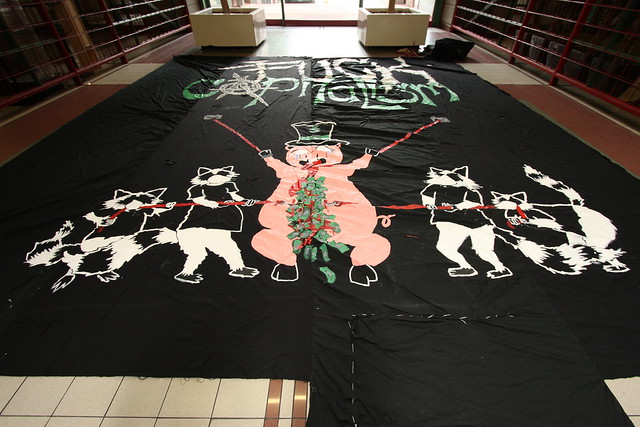 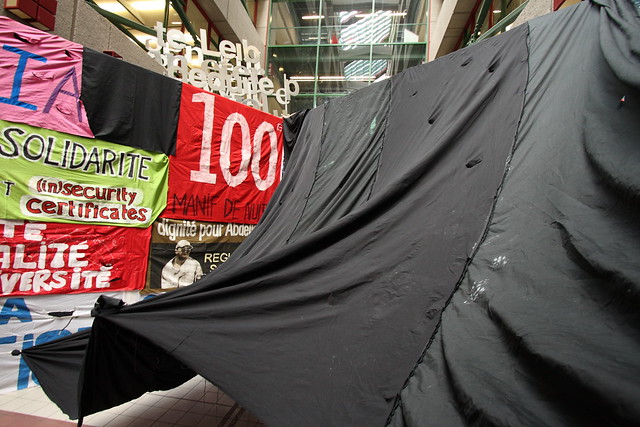 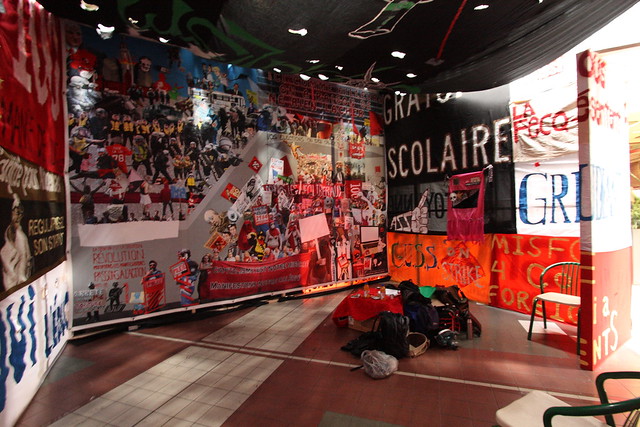 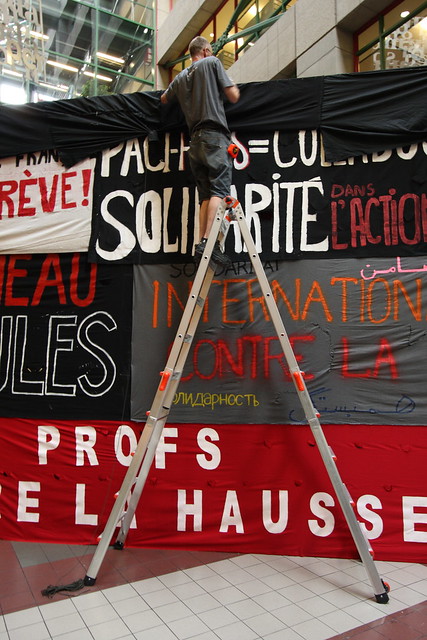 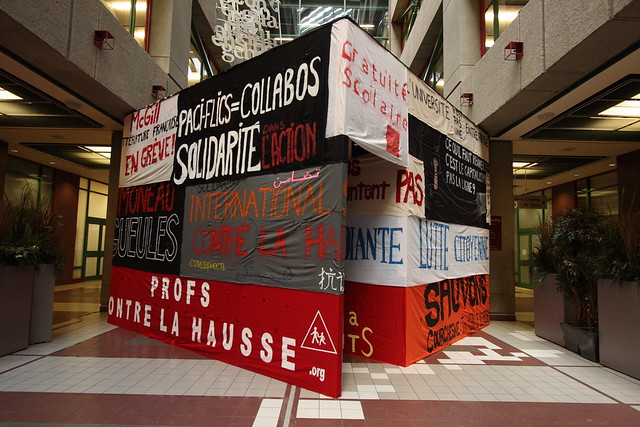 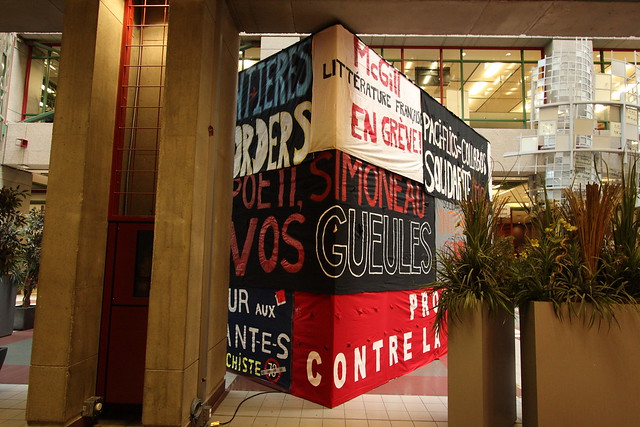 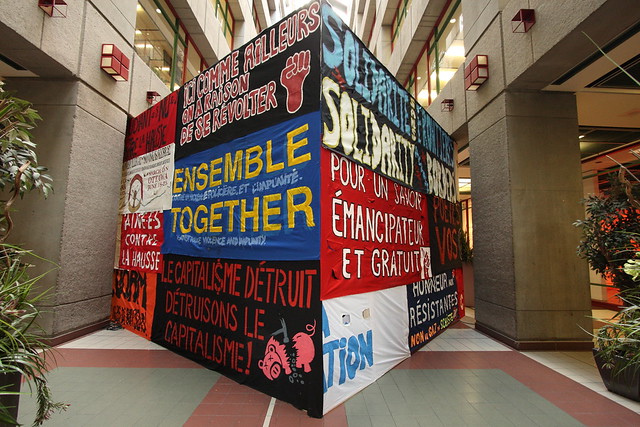 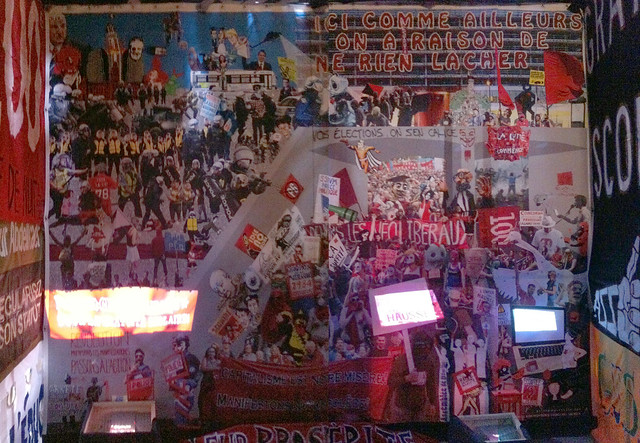 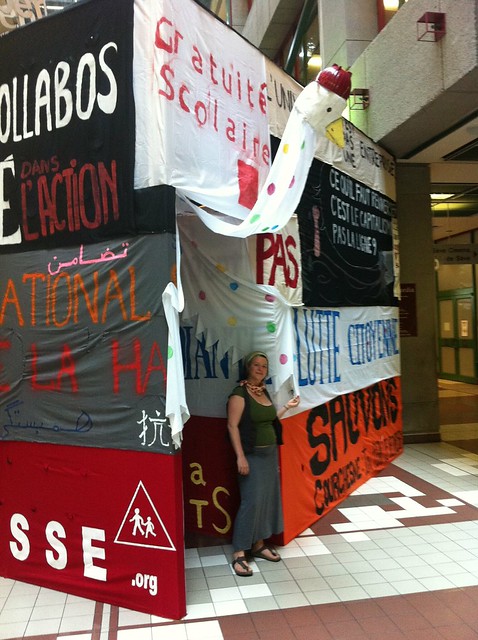 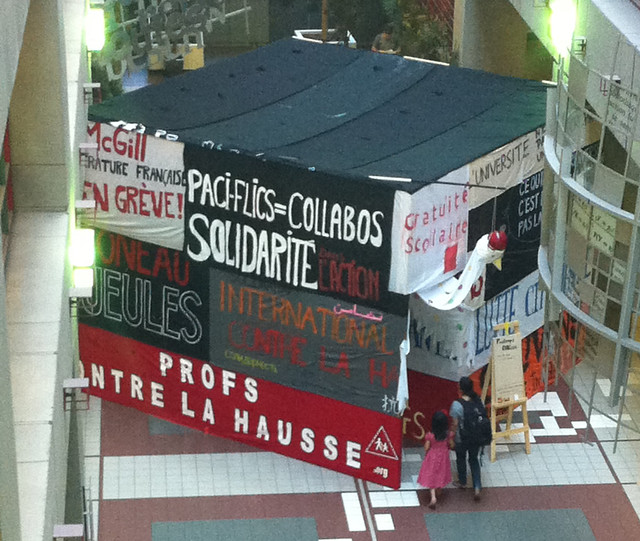